Being a Traveler, Destinations, Our Moveable Feast, Uncategorized 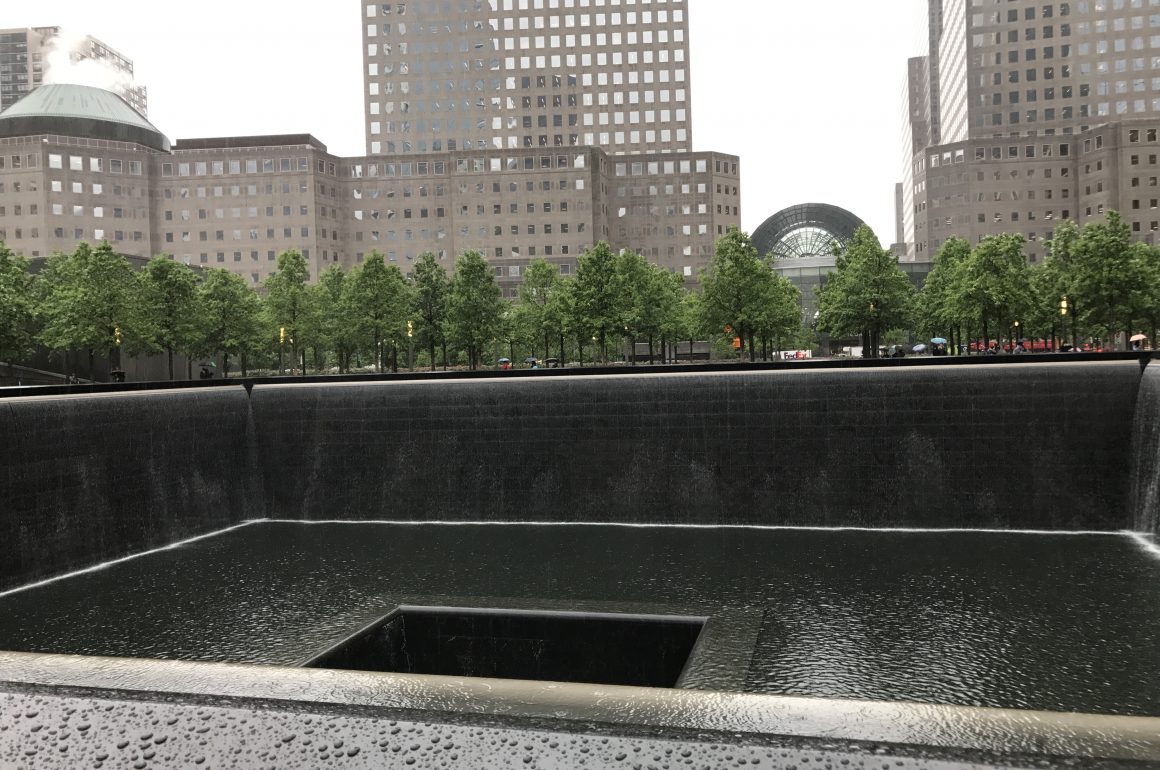 New York City guide and notes for next time these are things you should know about visiting New York City: 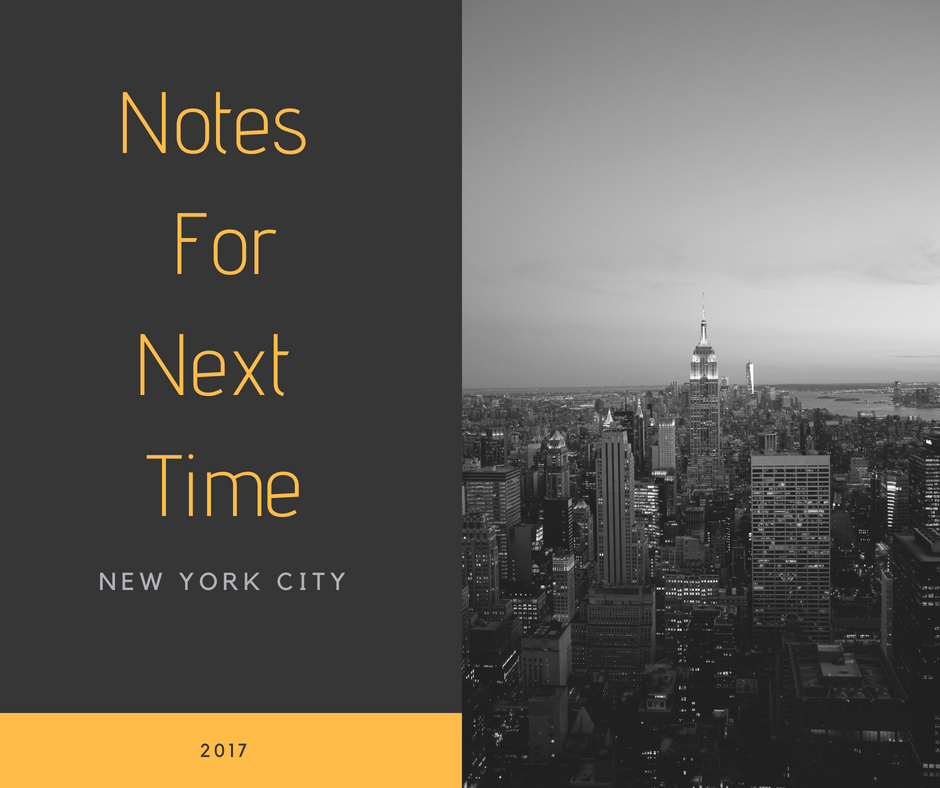 #1 There are two major airports that fly into NYC.  We flew into JFK but our flight out was not going to be simple because of a weather delay.  Our flights were canceled and we were booked on other flights that did not leave until 2 AM. When I called to work this out we were able to get a better time at La Guardia, so we flew home from there instead. Remember when you have to re-book, you don’t have to fly in and out of the same airport.  If you are flexible, you have more option that may open up in your favor.

#2 When you leave the airport and get on the subway, you can buy a  7-day unlimited ride pass.  It costs $32.  I regret that we did not buy it.  We ended up spending much more than $62 on both of us riding for those three days. $2.75 per swipe really adds up quickly when you are trying to pack in as much as possible and the subway is the quickest way to get to your destination.  Next time I will buy the pass and give it to someone who is leaving the airport and will be able to use it for the remainder.

#3 You will be confronted with people asking for money and it is different from living your normal life in your car in middle suburban America where you see someone with a sign.  You will have to walk right by them in NYC, you cannot roll up your window or drive away and forget them.  My policy is that I always give cash, when I have some, to people who play their instruments while I am waiting for the subway or on the corner.  They are making my life better, more beautiful as I wait, and I am happy to support that.   When I see someone truly destitute I try to find a place that I can buy them something to eat or a cup of coffee.  I mention this so that you can have a plan to help those who need help.  There are exceptions though, one day a guy was playing a stereo in the subway.  It was way too loud and obnoxious, and I did not support that, nor did I give money to the kids who got on the subway and played the guitar in the car and went up and down asking for money.  It was more like a hostage situation than any kind of beauty.

#4  Have a plan if you get separated on the subway.  Our plan was that we would ride to the next stop and get off and wait there for the other person.  It was not too much of a problem for us because the subway is not that busy on Saturday and Sunday and there were only two of us.  But Monday afternoon rush hour was enough to nearly send me into a panic a couple of times when I was sure we would not make it back to the hotel in time to get our suitcases and catch our flight.  It was so packed that we just took a cab to the airport rather than chance whether we could fit into a subway car with our luggage or not. There are several apps that will help you navigate the subway, but we ended up using google maps and we navigated just fine.  You are going to get a little bit lost sometimes, don’t freak out #5 is for you.

#5  The people of NYC get a bad rap.  We met some tough and gruff ones, but everyone was willing to help us if we thought we were lost or about to get on the wrong train.  The bellman at our hotel questioned the cabby about getting us to La Guardia and did not like his answer so sent him on his way and questioned the next one who gave an acceptable answer and he trusted that one to get us to the airport on time and ethically.  He was looking out for us and that happened so many times over our three days.  So be on your guard because there are people who will take advantage of you, if they can, but don’t be afraid of the New Yorkers that will be all around you.  They love their city and want you to love it too.

#6  Food is expensive here.  I take my favorite granola bars so that I can grab a cup of coffee and eat breakfast on the go, or if you like to start the day with a good breakfast,  have your snack later and eat an early dinner.  I try to keep it down to eating out twice a day.

#7  There are so many museums in NYC you could spend days seeing them all.  Don’t try to see everything in a day at a large museum like the Metropolitan Museum of Art.  Do some research into their exhibits, specifically what you can see there that is unique.  Have a plan and go see a few of the things you put on your list and be open to the surprises that will meet you on your way.  In your research look at the cost and compare the daily cost, the membership costs including the perks and the pay what you will day and hours.  It might sound cheap and you might feel bad looking at the guy at the counter telling him you came for the pay what you will day.  DON’T!  We planned to spend the day visiting several museums and spending only an hour or two in each one.  If we paid the full cost at each museum on our list, it would have been similar to the cost of a ticket for an entire day in Disney World.

The Metropolitan Museum of Art- $37

That is a grand total of $121.50 so I don’t feel bad saying to the nice man at the counter that we are here for the pay what you will hours.  We did pay to enter, and we made purchases in the museum shops and we ate lunch at the Met.  We left a lot of money in those museums. I don’t feel bad for using the pay what you will day to be able to see more than one museum in a day and you shouldn’t either. 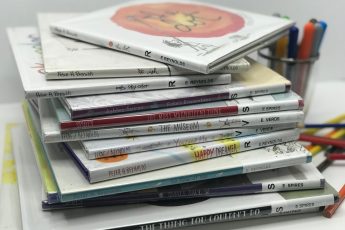 Picture books about art and creativity 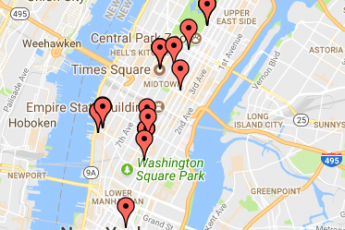 Where to Go in New York City 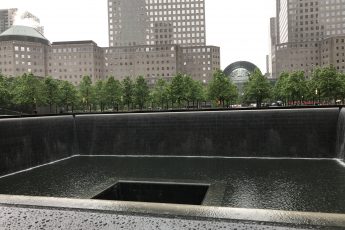